Office of Management and Budget

A first look at the USPTO’s proposed new fee structure

The USPTO’s proposed rules for implementing the AIA provisions relating to supplemental examination were published in 77 Federal Register 3666 today.  Additional rules are proposed relating to reexamination.  The time period for public comment expires on 26 March 2012.

Supplemental examination is a new procedure established under 35 USC §257 of the AIA effective 16 September 2012.  Under that procedure, the patent owner may request examination of a granted patent to cure issues that may be raised by an adverse party prior to the adverse party challenging the enforceability of the patent.  If the information submitted by the patent owner raises a substantial new question of patentability, this section prescribes that the patent shall be subjected to ex parte reexamination.  Patent owners are thus given an opportunity to reduce or eliminate known weaknesses in their patents prior to asserting them against third parties, subjecting them to a third-party due diligence investigation or valuation, or entering into licensing negotiations.

The USPTO states that it also has the authority to reset the fees for reexamination under 35 USC §41(d)(2), which states in part, that the Director may “establish fees for all other processing, services, or materials relating to patents not specified in this section to recover the estimated average cost to the Office of such processing, services, or materials”.  Based on that assertion, the USPTO proposes amending subparagraph (1) of 37 CFR §1.20(c) to also raise the fee for ex parte reexamination from the current $2,520 to $17,750 when ex parte reexamination is requested independent of supplemental examination — a 600% increase!

In addition, proposed Rule 20 would also set a $1,930 fee for petitions filed in ex parte and inter partes reexamination proceedings.

According to Section 10 of the AIA, the USPTO must submit proposals for modifying existing fees to a Patent Public Advisory Committee at least 45 days prior to publication of a notice of proposed change in the Federal Register and notify, through the Chair and Ranking Member of the Committees on the Judiciary of the Senate and the House of Representatives, the Congress of the proposed change not later than the date on which the proposed change is published. The USPTO states that the notice of proposed rule making does not comply with this procedure, because it would not be possible to complete the procedure in time to have the fees in place on the effective date for supplemental examination.

It does not seem self-evident why the availability of supplemental examination under 35 USC §257 should necessarily be tied to an increase in the ex parte reexamination fee.  The following graphic published on the USPTO website shows a projection of fee setting activities extending well into the year 2013: 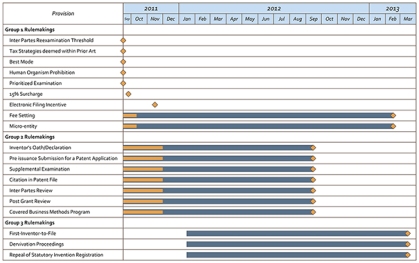 It also seems questionable whether one can justify ignoring Section 10 due to an anticipated delay in pushing through the fee increase.

The notice refers generically to the USPTO website to supply the rationale for the proposed fee amounts.  Does anyone know whether this reference complies with the requirement to publish the rationale in the notice of proposed rule making?  Has anyone found a detailed explanation on www.uspto.gov?

When fees are set under Section 10, the aggregate revenue from the patent fees may only recover the aggregate estimated cost of the patent operations, including administrative costs to the USPTO.  It is my understanding that compliance with this requirement is monitored by the Office of Management and Budget (OMB).  Readers may wish to consider directing their comments regarding the proposed fees to the Office of Information and Regulatory Affairs, Office of Management and Budget, New Executive Office Building, Room 10202, 725 17th Street NW., Washington, DC 20503, Attention: Desk Officer for the Patent and Trademark Office, or via email at OIRA_submission@omb.eop.gov.  Reference should be made to OMB Control Number O651-OO64.